Salvage a negative from FP-100C shot on your Polaroid

For those of you unaware, FujiFilm’s FP-100C is peel apart film used in Polaroid cameras and other cameras equipped with a Polaroid back.    I’ve been shooting the stuff for a few years on a Mamiya RB-67 and Polaroid pack film cameras (seen above).  Other than Impossible Project films, Fuji’s peel-apart films are the only other dominate option for instant analogue photography.

I just recently found out how to salvage the negatives from FP-100C.   For years I’ve just peeled off the exposed prints and disposed of the “other part”.  I have been missing out!  Not any more however 😉

My wife and I took a trip to our friend’s ranch a few weeks ago and she shot a lot of FP-100C while we were there.  We saved all of her negatives and stored them in a box once they had all dried.  Side note: I’ve found if you stash the negative away in a dark dry place, you can still salvage it.    If it’s left out in the open sun to dry, exposure will run its course and the negative will be overexposed/washed out.   Anyhow, she took an image of me plinking away with a bb gun on their back porch.   It’s a little dark on the print but I’ll be able to pull out some shadow detail once the negative has been scanned (that’s one of the cool things about this). 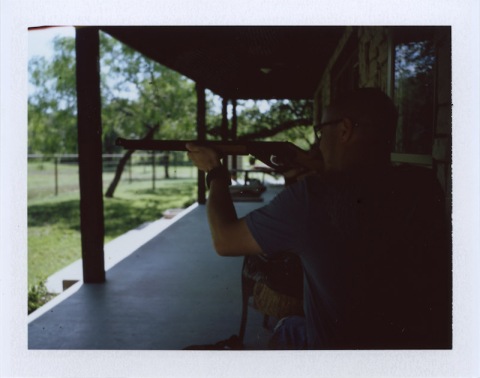 To salvage the negative it’s quite simple actually.    You’ll need:

– clips to dry the negative

Peel paper off around edges of negative

Turn water off and immediately place the negative face down (black side up). Press down on it so it seals itself to the glass. 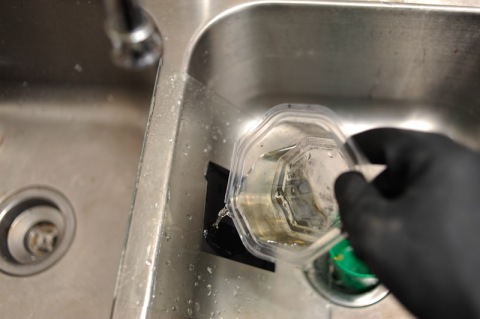 Without getting bleach underneath the negative, brush off the black backing of the negative. Frequently dip the brush back into the container of bleach. 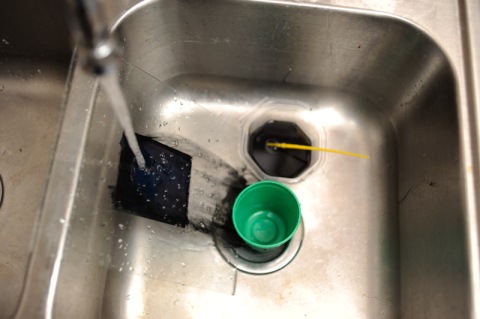 Run cold water over the negative to wash away backing. Be careful not to get water underneath the negative at this time. 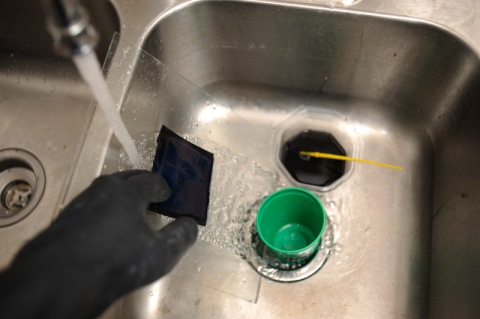 Pull the negative off of the glass using rubber gloves.

Wash the developer goop off of the negative. Be careful to not apply a lot of pressure otherwise you might rub off part of the emulsion. 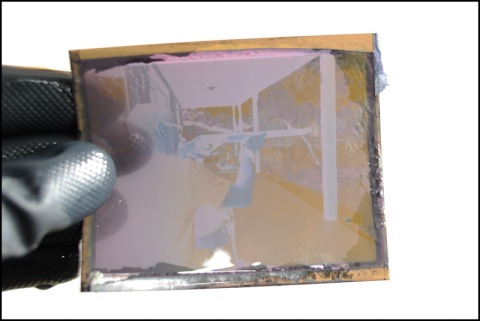 Clip the negative up to dry and you’re all set! 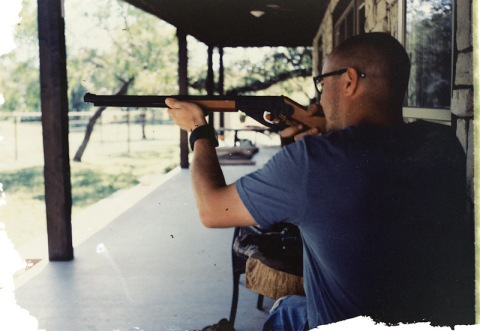 Scanned negative from FP-100C – white blotches are from where the black backing was not bleached off.

Here are a few other examples: 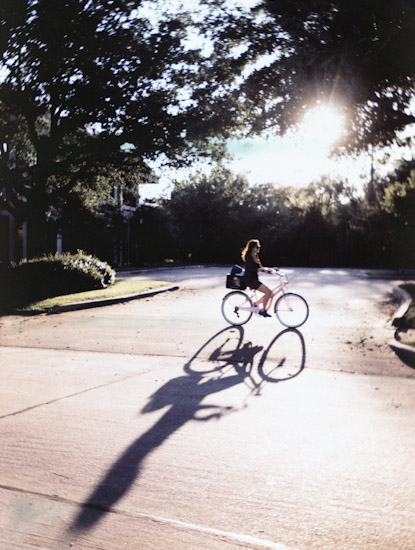 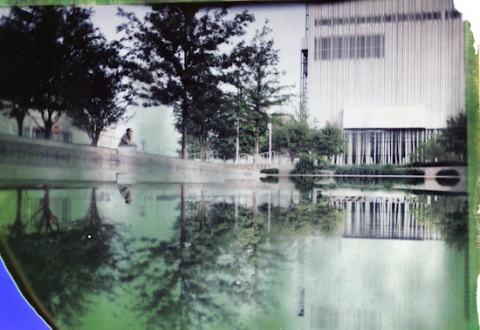 Bleached Fuji FP-100C Negative Scan – Green discoloration is from bleach leaking onto the front during the wash.  The left corner area is an undeveloped patch. 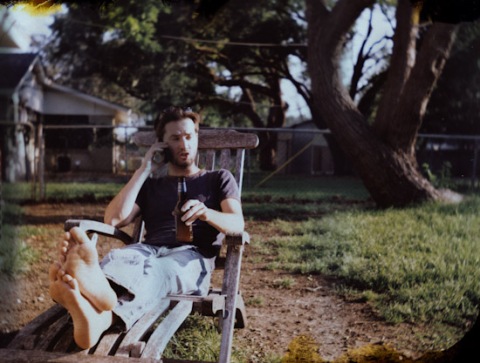 Thanks for taking the time!

Got an old pack film camera sitting around?   You can buy FP-100C here.  Aaaaand just because I love these peeps I gotta mention them again … Impossible Project is selling some of the last sepia toned polaroid peel apart film available.   Buy it here.

I’ve decided to start blogging about my experience with different types of films and cameras to throw a little pro film love “out there” … a small part of me hopes it drums up more interest in the art of film photography. 😉

My good friend, Billy Baque, has nudged me a few times about making a blog and I’ve never really had the inclination to. That all has changed over the past month.

I regularly browse CraigsList ads in the hopes that I’ll find a good deal on any number of cameras on the ever-growing want list.    About a month ago, a Polaroid Sonar SX-70 popped up for $20.   I was lucky enough to get a hold of the guy before anybody else did and within about an hour I had it in my hands.   Because of my inner-geek, I raced home, set up some studio lights, shot a photo on FP-100C of the SX-70 on a Mamiya RB67, bleached the negative, let it dry, scanned it and then admired the pic with all its bleachy-scanned-goodness.  Why not right?

I have known about and seen Impossible Project film for quite some time.   Billy shoots a lot of it in the San Francisco bay area and has been raving over the stuff for months.   Up until last month, the only camera I had that could have used it was an older Polaroid OneStep Flash.  I really didn’t want to test fate and use that for my first experience with Impossible film.   I ordered a few boxes of film from the Impossible peeps and was pleased when it arrived within a couple days at my door (their shipping times are quite fast I’ve found).

The first box I shot was PX-100 Silver Shade and I , for whatever reason, did not read the directions before hand.  The first couple exposures were pretty blown out and then I realized that I needed to crank the light/darken wheel all the way down to get a decent exposure.  I didn’t capture anything that was really good from that first box, but the challenge was something that tugged an inner chord in me.    The best from the batch was from a car show that I went to with a friend of mine.   At this point, my interest was growing, but I hadn’t really seen what all the fuss was about.

I had also picked up two boxes of PX-70 Color Shade (one regular and one NIGO).  I saved those and used them when I visited my friend’s ranch in Texas.   I had learned by this time that Impossible Project films were a little unpredictable and needed to be babied in order to get the results I wanted.

The first image I took with PX-70 Color Shade at the ranch was of a pair of purple coneflowers.  I shot this in the shade about 8:30 in the morning when it was probably 60-65 degrees outside.    I tucked it away in a box and snuck a peek at it after about 2 hours. 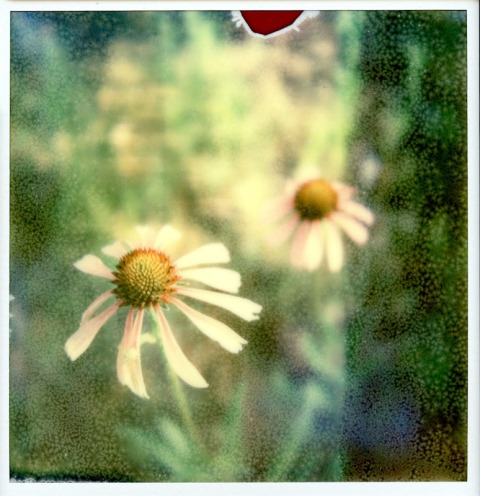 I experimented with a couple shots in direct sunlight and made the quick realization that the emulsion couldn’t handle it. Later on I read on their website … “Truth be told, the speed (light sensitivity) of this film is not totally where we expected it to be for the average SX 70 camera, and especially in bright summer light, the tendency for overexposed images is high.”

Throughout the rest of the week, I babied what little film I had to shoot and shot the rest of the two packs I had brought with me.    I did notice different variations between the regular pack and the NIGO pack.   The NIGO pack must have had a different developer mixture as it rendered colors differently and there were no undeveloped patches.   Check out some of the results .. 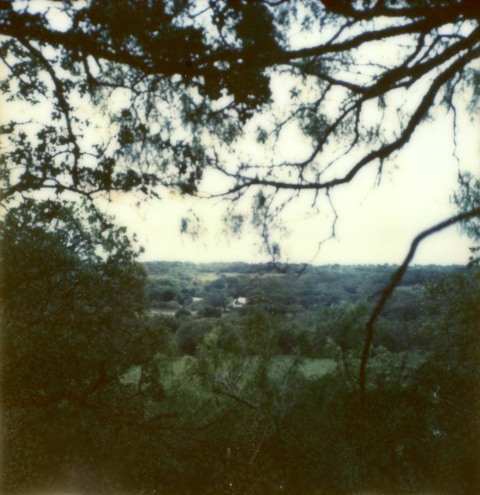 All in all, I am VERY pleased and impressed with this film.   It has a unique,artistic quality that is unparalleled in the world of photography.   There are no other films out there that can create an organic, analog, classic image like the Impossible Project Films do.   They provide a rare, original medium in which to create art.

BUY SOME NOW FOR YOUR SX-70, 600 series or Spectra Polaroid.

You are currently browsing entries tagged with negative at Justin Goode.