About a month ago, a couple friends of ours (Amy & Ellie) were visiting from Colorado. When my wife and I caught up with them at a bar, Ellie and I started gabbin’ about all things photography (she’s a photog as well). Since I’m usually carrying, I decided to bring the Mamiya RB67 loaded with one frame of old gen PX70 (I had recently read a blog post about this particular technique on TIP’s website). When I started fiddling with it, our conversation segued to the Impossible Project and I got her up to speed with the jist of their products & company. I took a photo that night but had screwed up the loading process (I left a practice photo in the polaroid back and laid the unexposed photo on top – I’m still perplexed as to how I didn’t feel that in the light bag). Needless to say I didn’t get an image BUT it got her interest piqued. She was probably thinking “Why would this guy lug around all this stuff for ONE photo?”

We talked a few days later and she mentioned that she wanted to commission me for a small project. Ellie and her husband Eric are expecting a baby boy in August and he wants to help her decorate. Apparently, Eric is a HUGE Dallas Cowboys fan. So much so, that he was thinking about putting astro-turf in the nursery. When that was vetoed he found a HUGE rug that looked like an aerial view of the field. Now, not that there’s anything wrong with those two suggestions but I think Ellie was looking for another solution to the compromise. 😉 After hearing about the Impossible Project and seeing some of the images, she said she’d rather have prints of some IP film shot at Cowboys Stadium. Sweet! We did a quick search online and found that there were self-guided tours that are offered throughout the year.

The day of the shoot arrived and I packed a bag full o’ cameras & film. I knew that for the exterior images I would probably shoot it with the SX-70 & PX-70 COOL + the occasional ND filter (kudos to Tyler Tyndell for the ND tip) and for the interiors I would alternate between the SX-70 and a Spectra AF w/ PZ680 Color Shade. My lady, Synthia, came with me as well and she brought a Spectra SE with some PZ old gen black frame. Synthia’s finally come around to the ol’ Impossible Project. At first she would jokingly make comments like … “You’re shooting more of that impossibly hard to shoot film .. gah … “. But over the last two months, her interest has increased and she decided to pick up a PZ old generation bag. She was saving the film for an upcoming trip to Colorado but I think we’ll probably be buying a little more before that epic road trip. Oops! On a tangent .. back to the task at hand …

We got to the stadium about 1 o’clock and picked up two of their self-guided tour tickets. I had never been there before and was a little surprised at just how ginormous the stadium was. I’d seen it from The Ballpark in Arlington but I’d never really been near it.

We made our way inside and almost every person that we talked to mentioned something about the cameras we were shooting. “I love y’alls Polaroids!” .. “You can still get film for those?!” … “Wow! Haven’t seen one of those in years” .. “I have one of those in my closet!” .. The love for Polaroid cameras & instant photography never ceases to amaze me.

A few of my favorites … 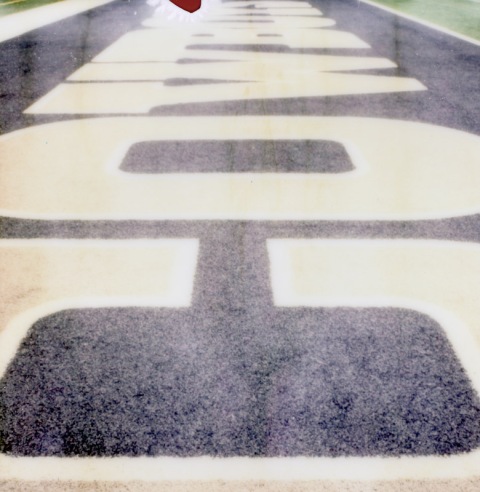 A couple of Synthia’s favorites … I love the black frame impossible photos.

For info on purchasing prints email me at info@goodephotography.biz

To buy your own Impossible Project film click here!