I woke up this morning, and for some reason or another, started looking for estate sales on craigslist in the hopes of seeing something interesting for sale.    I stumbled upon one in particular that had a vague description about a camera collection just on the other side of town.   I scrolled through some of the photos they had posted and noticed what looked to be a SX-70 case beside some junky 35mm cameras.  Oh ya.  That’s the winner.   I had about an hour to get there so I grabbed an empty film pack to test it and ran out the door.

Hit a good amount of traffic on the way but managed to get there with about 10 minutes to spare.  As I approached the house, I noticed a good amount of people outside .. probably 40+.   Everyone was waiting in a line and a few were gathered underneath a tree in the yard.   Hmmmm … haha.   I had to do something to get inside and get to that camera first.  After a little while,  I saw a few people looking through the front windows.   I moseyed my way up to the porch fake-texting on my phone and reached the front of the house.   Typically, I would not condone this type of behavior BUT in this circumstance .. I figured it was probably OK.    I peeked in the window and saw a pristine Polaroid case sitting on a table along with a few other cameras.   The door opened up and I heard “OK – We are going to take the first 30 people …”   Well .. I did come all this way for the camera.   I snuck inside and went directly to it, pulled it out of the case just a little bit (pristine condition), noticed the sticker price ($70) and I went to the front to pay.   “You sure were on a mission weren’t you??” The lady said .. haha.  On my way out the door I hear a few people asking where the cameras were .. sorry guys.

Once I got to the car, I put an empty pack of film in the camera and knocked off a few exposures.  It sounded great!  Happy with the new acquisition I cruised back home.

Once I got there, I started fiddling with it again and then noticed, the whirring noise it was making when doing its ejecting business, was sounding a little  strained.  I pulled the pack out and put it back in and the whirring started … but then the motor kept running.    The mechanism that spits out the dark slide & photos was not working .. haha.   NooooooOOOOoOo!   I just got this thing … I took the pack out and searched online for a fix.

I found a couple so I pulled out the tools.  Now I thought about writing this blog post AFTER I had already taken off the back cover so you’ll just have to imagine what that looked like 😉 I just pulled off the leather from the corner using a little screwdriver to first start removing it and then I peeled back the foil cover that was glued to the back.  The steps are: 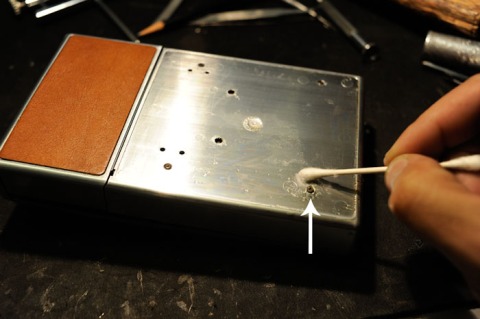 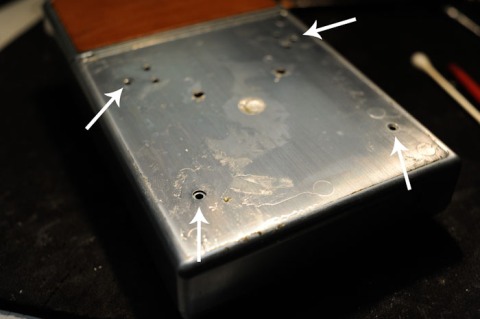 Pull the bottom cover off of the SX-70 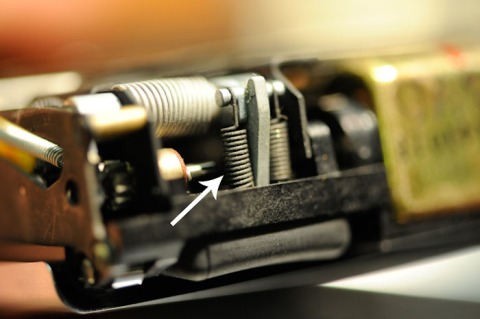 Use pliers to take off the spring located here …

Connect the inner spring to the spindle. You will need to stretch the spring out and work with it until it can clip in the spindle.

Spring connected to spindle on SX-70

Replace the spring you took off earlier, put the cover back on and then you’re all set!

Phew!  That was close!   Now if you’re wondering, there are SX-70 leather replacement kits online.  They are about $20.   Anyhow, I put in a pack of Impossible Project PX-70 old gen stuff and took a quick test shot …

It looks to be working fine!   Can’t wait to shoot the rest of this pack over the next day or so ..

You are currently reading The Dreaded SX-70 Whir at Justin Goode.